Introduction to Steven and Darren Essa´s Money On Demand System

Darren and Steven Essa are the owners of the Money On Demand X10 Effect System, which involves producing and publishing online webinars in order to generate revenue, which the two brothers claim to be far more profitable than any other means of making money on the net.

Who Are Steven And Darren Essa?

Steven Essa is a highly successful Webinar Training Expert and International Speaker who presents himself as the premier proponent and practitioner of presentation of webinars on the internet.

Hailing from Australia, and has had great success with his system called Money On Demand, the X10 Effect. Hailing a No 1 Amazon best-selling author as well from his book Money On Demand. 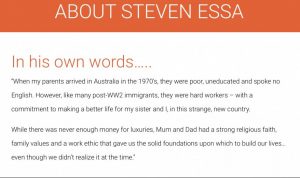 Darren Essa is Steven´s brother who owns 50% of the Money On Demand X10 Effect business, as well as several other businesses which they jointly own.

Darren is a proponent of partnerships in business as a means of achieving multiple streams of passive income online, and describes their methodology of leveraging the knowledge from their webinar system which they have optimised, and applying it to multiple other businesses, some of which they have commoditised and include in their package training.

What is Money On Demand System, X10 Effect?

Money On Demand is the Webinar training system offered by Steven and Darren Essa, and the software needed to implement the training. 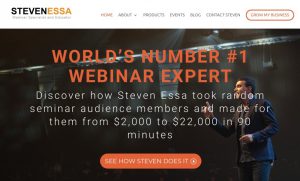 What Does The Money On Demand Training Comprise?

The Money On Demand training comprises the following:

Additional facilities and functionality available at extra cost are as follows:

Here is an explanatory video about How Steven Essa Created a Webinar Formula which led to marketing of the Money On Demand System (X10 Effect).

Is Money On Demand, The X 10 Effect Any Good?

What Benefits Will Money On Demand Bring To My Business?

Steven and Darren Essa claims that subscribers to his business system can dramatically improve their performance in 3 ways:

Subscribers, once they have carried out the necessary training will be able to make their own webinars and place them on the internet using Youtube or using zoom or skype or GoToWebinar conferences.

Steven´s Webinator software allows a subscriber to easily and quickly and efficiently prepare their own webinars for presentation on the internet.

Using Steven´s guidance and mentoring from his extensive experience of preparing and presenting webinars, you can see the most profitable ways to mobilize your new skills.

How Much Does Money On Demand, the x10 Effect cost?

The cost of Money On Demand, the X10 Effect is 1500GBP, or a deposit of 497 GBP, followed by 2 x monthly payments of 597GBP. The cost of the offer depends on the venue and offer on the day, some of the above functionality and services may be monetized. Steven Essa offered  a particularly good deal including many bonuses for free at the Digital Nomads conference organized by Andrew Reynolds on 29 June to 1 July 2018.

We believe that the principle of Videos On Demand is exactly what is needed for internet success owing to the runaway success of video on Social Media channels such as YouTube.

Steven Essa has mastered the art of webinar preparation down to a fine art, and has also developed his own software in order to make webinars, called Webinator software. His system seems to be one of the best available on the internet.

We have not yet tried out Steven Essa´s training but once we have done so we will complete our review of the Money On Demand System.

The alternative of course, if you dont have money to invest in the X10 Effect System is to think through and formulate your own formula for success, using your own expertise, and who knows, it may be a winner!